An Interview with Aria by Chloe 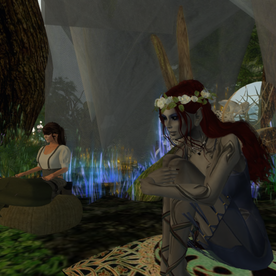 Chloe Leftfeet looks around her, "Gosh! This is really pretty! I"m glad you wanted to meet me here, ma'am."

Aria Kaze smiles brightly and gestures to one of the cushions around the perimeter of the Circle, "Have a seat and take comfort.  This is where the Bards gather to share tales and songs."

Chloe Leftfeet cocks her head, thinking. "Why?" she asks finally.

Aria Kaze, "A few reasons.  One, I believe is that it was a natural gathering spot because of how the trees grew.  Another, I believe, is because the World Song has a focus-point here.  I know that I can feel a strong connection to it in this spot.  And most importantly... tradition.  It has been held here long and long, and we see no point in changing." She giggles a little.

Chloe Leftfeet giggles. "Oh, no. I meant, why do you share stories and songs? That's really confusing. You makeup all these pretty things and then you... well... let everyone else hear them."

Aria Kaze smiles, "Oh, I misunderstood" she thinks for a moment "Why do we share our stories and songs?  Because we create them for the enjoyment of everyone.  Sometimes they are for entertainment, sometimes to tell histories or news or even to tell a tale that would not be otherwise well received." She turns her silver gaze on the young lady, "In many cultures, Bards are held in high respect and esteem, and are even considered sacrosanct... they cannot be harmed.  I have even been to places where the Bard is considered gifted by the gods."

Chloe Leftfeet, "Gosh. Is Sylvhara like that? Do they think you are gifted by the gods?"

Aria Kaze's merry laugh rings out, "Oh, I very much doubt that.  I think that we are appreciated for the talents we share with everyone, but I don't think anyone feels that we are gods-touched."  she giggles again "I personally don't know that I would like to be revered quite that much, to be honest."

Chloe Leftfeet frowns, "I guess I can understand that. Being bowed at would be really strange."

Chloe Leftfeet, "How did you wind up in Sylvhara, then?"

Aria Kaze blushes a little as her face grows a bit somber "I was hiding in a cave from the raiders who destroyed my home and, well, I fell through a gate that passed through Faery to this place."

Aria Kaze, "More.. disorienting.  I didn't actually fall, but going to sleep in one place, and waking up in another was very confusing."

Chloe Leftfeet listens. "Did you like this place when you got here? Or did you want to go back home?"

Aria Kaze's eyes grow darker with no little sadness "I didn't have a place to go home to.  The last I saw of the Glen before the Elders ordered me to run was the bodies of those I knew littering the ground of the ruins of the only home I knew."  she sits still for a moment "I was confused when I realized I was nowhere near anywhere I knew, but I met a couple of the Fae, and they made me feel welcomed." she smiles softly "... and needed...."

Chloe Leftfeet frowns, "That's really sad. How long has it been?"

Aria Kaze thinks for a moment "Hmmm.... I can't remember exactly.  It feels like I've been here forever.  But, I think.... in the time frame of the humans... perhaps three years?"

Chloe Leftfeet nods, "Have you done yet what you wanted to?"

Aria Kaze giggles "I can't really say because there is always something new that catches my attention.  I have been studying Bard-craft and I think I do well at that.  I like to meet people and make friends.  I don't have any desire to be ... important... but I hope to be well thought of.  I sing, and dance, and tend to the bees and flowers.  So... I suppose I have done what I want."

Chloe Leftfeet listens to this, "Is there any new plans you want to do? Future stuff?"

Chloe Leftfeet blushes, "I mean, ARE there any new plans?"

Aria Kaze grins, "Open trade between Anar and the rest of the realms?  My brownie friends and I have been making mead and other honey drinks and sweets that people seem to like.  It would be lovely if they were more readily available in the taverns and inns."

Chloe Leftfeet claps her hands. "Oooh, that sounds really nice! I should make sure we have your honey items at the Lion's Head!"

Chloe Leftfeet "That'd be really nice." She giggles, then remembers she is supposed to be interviewing. "Is there anything else you want to tell folks?"

Aria Kaze pauses and thinks on that for a bit

Chloe Leftfeet looks over at the fae.

Aria Kaze, "Never judge.  No one is exactly like anyone else, and you cannot make assumptions that one person is like another just because of their race.  Learn who people are... everyone is beautiful after all."

Aria Kaze looks up at the fae in white, "Miye sister"

Chloe Leftfeet nods, "That's really nice. Thanks for talking with me, ma'am." She inclines her head to Aria and also to Farenheid, and walks off to give the information to Dishan.