​An Interview with  ​QUEEN KANNA BLOODROSE by Dishans 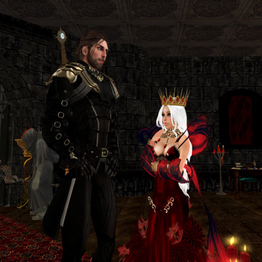 Dishans missive to the Queen Kanna was accepted and Dishan was granted an audience to ask his three interview questions. So he makes his way through the land of Lundene and up into the rich mountains until he finds the large ominous building of castle Bloodrose...

Dishan Cal'Der moves in slowly as he takes in his surroundings, he makes his way near the throne, and stops at the sight of her guards. He bows respectfully, "Your majesty, it is an honor to meet you, and I thank you for your time." He swallows a bit nervous as he rises up, "Its just three questions," He looks to her red eyes and then to the floor at her feet, "How long have you been here, in this realm?"

Kanna BloodRose tilts her head and smiles as she watches him nervously approach her. "Be gone." She would wave to her guards and they would disappear into the shadows of the castle. She leans forward to answer him, "I have been here for hundreds of years child." Her crimson eyes gleaming in the candle light.

Dishan Cal'Der nods as he scribbles down her answer onto his parchment with a piece of lead, "Hundreds of years?," again he swallows... "And in those, 'hundreds' of years have you accomplished your goals or achievements?"

Kanna BloodRose giggles a bit, "Oh dear child. I have. My Clan's wealth is rivaled only by that of the oldest of dragons, and we have established our house in stone. We are the eldest Vampire Clan in the realm and the longest standing." She nods, "I have accomplished many achievements, such as creating my one of a kind rare blood rubies." She leans and whispers, "If I tell you how they're made it might churn your stomach." She laughs, her white fangs gleaming.

Dishan Cal'Der looks up to her and notices that the guards are indeed gone from the area. Again he focuses on taking her words to the parchment, he nods a bit as she speaks and stops for a brief moment as she leans in a bit and mentions her Blood Rubies, "We can pass on that information, your Grace, it keeps them.. Mysterious." He does manage to give her his cheeky smile... "I know you are an immortal and have much life in history, but what of the future? Do you have any plans you would like to see come to fruition?"

Kanna BloodRose nods, "Indeed I do. But who is to tell of the future? I have eternal life, I do as I please and I walk tall toward tomorrow with many ideas in mind. For instance, I will be hosting a ball in the coming future to celebrate the alliance between my clan and our kin from Taure Ru. With many festivities to come." She smiles.

Again Dishan is nodding as he writes, his mind filled with the curiosities of an immortal life, he lets out a sigh as he looks up to the Queen Kanna. "Well your Majesty, I will look forward to your Gala." he smiles to her, "Those are the questions, M'Lady, clean and simple. I can't thank you enough for this audience, and I do wish you many more hundreds of years of good life and health." Dishan closes his eyes almost in a cringe wondering if he what he said was acceptable. He bows to her, "Your Majesty," as he begins to step away.

Kanna BloodRose smiles and bows her head "It was a pleasure to have you." She grins wickedly and leans, "Next time I will have to have you over for a meal" She giggles, "Safe travels to you. Be well friend." She smiles to him.