An Interview with Keira by Dishan 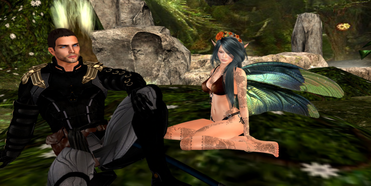 Keira AlzaelKeira Alzael enjoyed a nice flight back from Healer's Hall and stretched herself by flying around Anar, enjoying the view and preforming aerial acrobatics with some of the birds she flew by. She saw a figure near the great tree where she spent so much of her time and flew closer to investigate. As she got closer she recognized her friend and waved to him, coming to hover nearby and said "Miye Dishan, how lovely to find you here. Such a rarity since you've added the Whispering Pines isle to your rounds."

Dishan Cal'Der: Dishan turns to the voice, he moves in a complete circle before looking up a bit to see Kiera, he chuckles as he replies, "Kiera, good to see you." he gestures out to the land of Anar, "I still like to venture here when I am able, my honor to the fae Queen still stands.. and yes, I do visit Greenhaven as well." Dishan smiles to her, "Its okay for me to be in this area, yes?"

Keira AlzaelKeira Alzael giggles recalling the time sister fae became so quickly offended. "Aye, coast is clear, and you're always welcome here my friend. I know you to be honorable and polite, two things dear to all fae." She moves closer and lights gently on the ground nearby adding. "Sylvhara has two new druid acolytes, both fae." she says proudly.

Dishan Cal'Der: "Oh really now," he nods as he thinks on that, "Druids are good." Dishan studies Kiera for a moment, "Your quite the mentor, Kiera.. You know I actually came here to seek you out, and I'm glad I did. I was wondering if you would like to answer a few questions, its something for the Anniversary. A peek into the lives of; if you will." he gives her his cheeky smile.

Keira AlzaelKeira Alzael grins openly at his expression, exposing two rows of perfectly pointy teeth. "So you were, were you?" she then laughs, a sound not so unlike that of the peal of bells when she's happy. "Well you have me now." she ponders warning her friend to take care with his wording but again recalls the earlier incident among the sisters and figures he's learned how very important wording can be when dealing with fae.

Dishan Cal'Der: Dishan grins as he moves over to her, he pulls his small rolled leather from his belt and once again prepares his parchment and lead, "Answer them if you like," he shrugs, "less for me to write if you don't," he says in a playful tone, "Okay first questions to my friend, Kiera.. How long have you been in this realm, or realms for that matter..?"

Keira AlzaelKeira Alzael repeats his question in her mind. He did say realms, but did he mean only these specific realms or all the realms of the world? So she does what she does best she starts at the beginning. "Returning from faery, where I had gone to rejuvenate, I found my former home all but gone. The sea had swallowed all the beautiful lands I had known and loved. I was happy to find that many of the people had scattered to new homes, a good number of them are right here in Sylvhara. Mortals have always been a favorite curiosity of mine, and there is a good variety here so I stayed. That was a summer past the summer just past." She grins at her own cleverness, thinking she covered all her bases.

Dishan Cal'Der: Dishan snickers a bit as he writes her words, he glances up to her briefly to see her prideful face and then continues to write. "Sorry to hear of that loss, but you do seem to have quite the growing family now... So, since the summer last before the summer; uh.." Dishan purses his lips as he realizes the fae always seem to fuddle him up, he pats at his short hair and continues, "have you achieved any goals, did you have any?"

Keira AlzaelKeira Alzael shrugs and laughs "Oh no, I just wanted to study the people here. I saw Anar and was captivated by the beauty here. I spent many days, playing with the animals here, and before I knew it time had passed and it had became my home on the mortal plane." She paused to see that he was following then continued "I met Dame Peli'nore and she showed me a genuine affection for all things fae, then later the Dragon Regent Malakyte, who took me under her wing." She pauses for effect, grinning at him wondering if he catches her wee joke.

Dishan Cal'Der: Dishan is trying to keep up with her as she rattles on with some key names, "Oh yes Dame Pelinor and the Dragon Regent, very good, very good indeed." he stops and looks over to her, "Everything just fell into place for you it seems... Alright, so here we are now, my friend; and do you have any thoughts or plans for the future?"

Keira Alzael: "Oh yes!" she answers quickly. "As emissary of the fae, as well as druid, I travel to increase my study of the races who reside in all the realms. It satisfies my curiosity as well as adds to my healing skills." she smiles warmly to him.

Dishan Cal'Der: Dishan nods to her and grins at her excitement, "You do seem to be very curious about things, I know that is fae nature, but you must have inherited the bulk of it, ey?" Dishan chuckles as he writes down her statement, "This is wonderful Kiera, quite the venture." Dishan inclines his head to her now, "I thank you for you time, Arch Druid."

Keira Alzael: "This has been most kind of you Captain Cal'Der." she says quite formally and offers him a practiced courtesy.