An Interview with Linn by Chloe 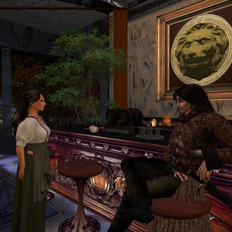 Chloe Leftfeet looks up as the mayor of Greenhaven walks in. "Hi!" she chirps, as she cleans the counter. "I've been hoping to see you, mister."

Linn Darkwatch looks surprised, and a bit concerned as the bartender greets him. "For me? Is there a problem you need a mage for?"

Chloe Leftfeet giggles, "Gee, no. But... well... Dishan asked me to talk with folks. I guess he thinks I'm not very shy. He said they should be... umm... 'longtimers' I think? Ask them questions."

Chloe Leftfeet, "Oh! Can I get you something? You can drink while we talk." She frowns briefly. "If you want to talk, I guess."

Linn Darkwatch chuckles, "Well, I'm not native to this land; I'm an immigrant like so many others. But I've been here a little while. What does Dishan want to know?" Linn tilts his head. "I should have thought he'd know where to find me himself."

Chloe Leftfeet giggles again, "Oh, you know he's short on time. He seems to think it's better if newcomers like me ask the questions. Something about a 'fresh approach', I think he said."

Linn Darkwatch slides onto a barstool. "Well, as long as it isn't an emergency," he smiles and relaxes a bit. "What did you want to know?"

Linn Darkwatch shrugs carelessly, "Mead will do, thank you."

Chloe Leftfeet nods and deftly, very carefully, pours out a glass of mead for the archmage. As she pours, she asks, "You said you haven't been here that long. How long HAVE you been around here, and where?"

Linn Darkwatch: "Oh, a few years. I first came to Sylvhara with Malada and Katina after the realm of Eternity - where I was an ambassador and trader - was destroyed in a catastrophe. But I left and traveled for a while and returned a few years later."

Chloe Leftfeet nods, listening. "What kind of things were you planning to do here? And have you done them?"

Linn Darkwatch: "Well, originally we were just seeking shelter, a safe place to be for a time." Linn smiles slightly. "No land is truly safe, though. That is why Sylvhara has her rangers and cavaliers, why my homeland has warriors and Guardians. Someday I'll return home, but I'm on wander time now. No hurry."

Chloe Leftfeet: "You said you were seeking shelter, at first. What did you want later? And have you found it?"

Linn Darkwatch: "Well, I've learned magic, to better protect those I care for, and I've found friends and companions. I very much enjoy teaching and seeing my students gain mastery of their skills."

Chloe Leftfeet, "Are there any new things you want to do but haven't done yet?"

Linn Darkwatch cocks his head, "Many things. Is not that a part of the joy of existence, doing new things?"

Chloe Leftfeet chirps, "Sure! Anything special, though?"

Linn Darkwatch looks very serious then, "The most special thing I have not yet done, I will not know whether I have succeeded in until I meet the true death. I pray that I will be found worthy to become einherjar, to serve as a sacred warrior in the afterlife."

Linn Darkwatch chuckles. "Obviously, else how would I walk?" He flashes her a grin, with just a hint of fang.

Chloe Leftfeet's eyes widen. "Umm...." she says, and mutters under her breath, "Dishan, you did it AGAIN!", then smiles sweetly at Linn.

Linn Darkwatch reaches out to attempt to pat her hand, "It's all right, lass. I'm Guardian; I don't harm the innocent."

Linn Darkwatch holds back his laughter and speaks gently. "Truly, lass. Don't threaten me or mine - those I care for or have taken under my protection - and I won't harm you. So unless you're planning to pull out a cake knife and start attacking the patrons here, I think you're safe."

Chloe Leftfeet giggles, "Oh, no. I wouldn't do that." She glances over to the kitchen at the merest whisper of wings and meets the raven's eyes, then looks back. "I think Dishan will be happy with this. Thanks for talking with me! You and that lady have been really, really nice."

Linn Darkwatch smiles, "Any time." He pushes some coins across the counter automatically. "Luna bless, lass."

Chloe Leftfeet looks down at the coins and up at the archmage. "Umm...I said I'd buy the mead for you, mister."

Linn Darkwatch: "I know. This is for your service, not the mead."

Chloe Leftfeet blushes, "Gee, thanks. You really are nice."

Chloe Leftfeet attempts to curtsey, and has to catch herself on the counter as she starts to tip sideways.

Linn Darkwatch reaches out to steady her, "Careful there."

Chloe Leftfeet giggles, "Oh, this happens all the time. Ask anyone."

Chloe Leftfeet: A vanilla wafts more strongly through the air as she moves..

Chloe Leftfeet blushes, "Nice of you to mention it, I'm sure. Thank you! I'm sorry, but I must leave now." She tucks away her apron and nods to the next person on staff.