An Interview with Juni by Dishan Cal'Der 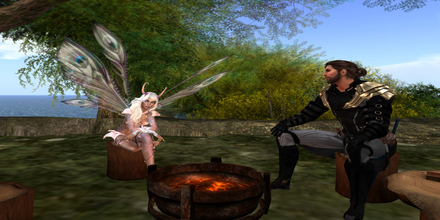 ​Dishan Cal'Der: Dishan  makes his way through Anar as he said he would to meet Juni for an interview. He pats at his brow as he moves up into the small meadow area near the far side of the island. "Its been awhile, the island seems, bigger." he grins as he sees Juni.

ĴŨŊϊ ĴŨŊϊ looks up hearing the familiar voice of Dishan and smiles her greeting to him "Miye, Dishan." She looks around taking in the familiar surroundings of her home "I do not think any of the druid fae have been working to grow our lands. Perhaps you have become smaller?" She tilts her head and offers him a steady gaze.

Dishan Cal'Der: Dishan snickers a bit, "Nothing surprises me anymore," he says with a shake of his head as she mentions he may be smaller, "I hope the day has been well for you, I do appreciate your taking the time for this.... Are we okay here then?" he glances a bout for a spot to sit.

ĴŨŊϊ ĴŨŊϊ nods "Aye, this clearing is where I make my home on Anar. She points over her shoulder indicating a tree with a sign at the bottom about sleeping fae "That one right there is where I usually rest my head." She sweeps out her left hand towards the stumps surrounding the fire next to her "Would you like a seat?" She then steps to the small table set up, reaches down to pick up one of the pipes there "And a smoke? These are filled with our best fae weed if you would like to puff." She then lifts the pipe to her lips, takes a puff herself and then holds it out to Dishan.

Dishan Cal'Der: Dishan watches to where she points as he looks from her sleeping spot to the stumps nearby. he gently waves a hand to pass on the smoke, "None for me thank you," he sits down onto a stump and enjoys the scent of what Juni puffs on as he pulls his small leather roll out and rests it on his lap. "Alright, lets see.. Its a few questions." he opens the folder and takes a small piece of lead to write with, "Lets start with, how you came to be here, or how long have you been in the realms of the land?" he smiles over to her.

ĴŨŊϊ ĴŨŊϊ shrugs, takes another puff off the pipe before replacing it on the table. She then makes her way over to the stump next to Dishan and takes a seat. Tilting her head, she smiles wistfully as she thinks upon her history here in the realms. "Twas a loooong time ago I found myself here, in the realms, quite by accident. For, back then, I did not remember my beginnings or where I had come from. And I was here, in Sylvhara for a time before being called to Vana where I made my home up until recently when I returned back to Sylvhara and Anar." She smiles softly to Dishan as she finishes speaking.
(( I have been a member of the GA for 8 years ))

Dishan Cal'Der: "Its been a journey for you, thats always nice." he watches her puff the pipe for a moment, "and as a fae, I guess it is difficult to pinpoint any time frame, you all seem to have been around forever." he snickers a bit, "Okay, moving on.. have you achieved any set goals?"

ĴŨŊϊ ĴŨŊϊ frowns as she thinks on his next question. Her brows dropping low over her eyes as she nibbles on her lower lip. "I would not say I have ever made, goals per say. But I have had my own achievements. I was a part of the old Fae Guard when it was commanded by Llyra when I was first here in Sylvhara. Then, once making my home within Vana, I became High Priestess, which is a title I held until I was called from the realms for a time. It felt like I was gone for ages ((three years)), but then I found myself pulled back. I am no longer Priestess, but, I am currently trying to make my way upon the path of Druidry. Though, I am finding that one to be more challenging than I had expected. I also oversee the current Fae Guard here in Anar. Though, we are small compared to what we once were, we are still a fierce lot." Her eyes glow and a look of pride for her sister and brother fae passes over her features as she thinks upon them.

Dishan Cal'Der: Dishan nods and smiles as she speaks of her experiences, he scribbles her words down onto the parchment, "Thats quite a bit, and very impressive indeed; but it does make for stronger character.. I think anyway." he smiles again and pats at his beard as he thinks for a moment, "and I know the fae are not to be underestimated." he gives her a playful wink now, "and what about the future, Juni?.. Druid... maybe something else?" he tilts his head a bit with his question.

ĴŨŊϊ ĴŨŊϊ shrugs, tucks one leg under her on the stump before leaning forward, resting her arms on her thigh. "I will work on my Druidry and then go from there. The future is always uncertain and even the best laid plans can change. I will focus on doing my best for both Queen Comet and Queen Cia, for the fae, and for the realms." She sits up straight again, tilting her head as she looks at the Asguardian "Why, was there something else you think I should be thinking on other than what I have been thinking?"

Dishan Cal'Der: Dishan stops as he writes and thinks on her ending question, "Mmm," he just shakes his head with a grin, "No, nothing comes to mind." he chuckles as he finishes writing in what she had said. "I think you are wonderful, Juni, and I think whatever you set your mind to do, it will be done for the betterment of all." he inclines his head to her, then starts to adjust his folder and roll it up. "See, clean and easy," Dishan tucks the small leather into his belt and inhales some of what Juni is smoking, "That smells good, but no time for smoke, my friend. Thank you for your time, Juni." he starts to rise to make his departure.

ĴŨŊϊ ĴŨŊϊ rises as he does, her hand gesturing towards the table. "Feel free to take a pinch for your pipe for later if you wish." She smiles at him "And, you are always welcome to come visit Anar at any time. It might be home of the fae, but we do so enjoy our visitors." Offers a wink up at him "Just take care and try to avoid the pixies, I have heard that they have been a bit more mischievous as of late. But then again, what fae aren't mischievous from time to time." She then gives Dishan a devilish grin, her eyes twinkling a bit as it appears upon her lips.

Dishan Cal'Der: Dishan looks back with a grin, "I'll see you soon, give my regards to all." he waves a hand as he heads down the small hill.